ASA’s most prestigious award, the Lifetime Achievement Award, was presented to long-time ASA member and industry leader, Dave Bulthuis, vice president, Industry Relations and Government Affairs for Costa. Bulthuis was recognized for his extraordinary leadership and lifelong commitment to recreational fishing and the sportfishing industry.

Dave joined Costa in 2003 as Vice President of Sales. Prior to joining Costa, Dave had 25 years in progressive sales experience, most of which had been in independent rep organizations.

Dave was an integral figure on ASA’s board of directors for eight years, including as Chairman of the Board from 2015 through 2016. 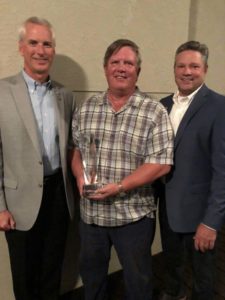 ASA’s Future of Fishing Award was presented to long-time ASA member, Jeff Pontius, recently retired from his role as President and CEO for ZEBCO Brands. He was presented this award for his commitment to recreational fishing’s future through growing participation in the sport and his leadership in the industry’s trade association.

He also served on the Recreational Boating & Fishing Foundation’s board of directors as Chairman from 2003 through 2007. He returned to the board in 2015 where he has an At-Large seat on the Executive Committee.