Fisheries management policy veteran will focus on a number of recreational fishing species.

The American Sportfishing Association (ASA) is pleased to announce that Michael Waine, most recently a Fisheries Management Analyst with NOAA Fisheries, has joined the ASA staff as Atlantic Fisheries Policy Director. Based in Morehead City, N.C., Waine will focus on fisheries policy in the Mid-Atlantic and New England regions. 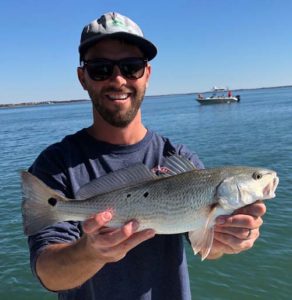 “Mike’s seasoned experience at the state and federal levels adds another layer of expertise to our Government Affairs team to help respond to the myriad of East coast fisheries policy issues that impact our members and anglers,” said ASA President Glenn Hughes. “Mike came highly recommended to us as an authority on Atlantic fisheries management and we look forward to working with him.”

“Given the numerous fisheries management issues in the region affecting important species like striped bass, summer flounder, menhaden and black sea bass, the recreational fishing industry needs a strong voice to engage in the policymaking process,” said Mike Leonard, ASA’s vice president of Government Affairs. “Mike is well qualified to serve this role for us, and I’m excited that he’s joining the ASA team.”

Waine began his career as a research associate, managing an environmental risk assessment for exploratory wind farm locations in North Carolina. He then spent five years working for the Atlantic States Marine Fisheries Commission where he coordinated the development of fishery management plans for many high profile Atlantic species such as striped bass and menhaden.

His role placed him at the intersection of science and management where he oversaw the regulatory process working with technical committees, industry constituents and legislators to bring comprehensive management approaches to controversial species such as menhaden and striped bass.

Waine most recently worked as an analyst with NOAA Fisheries where he was involved in rulemaking on bycatch reporting and helped head a new initiative on ecosystem-based fishery management.

“It’s an honor to join ASA’s Government Affairs team where I can use my passion for fishing, existing working relationships and on the ground experience to represent the interests of ASA’s membership,” said Waine. “The sportfishing industry is facing many new challenges in the Atlantic region, and I look forward to sharing my knowledge and engaging ASA’s membership in the fishery management process.”

Waine is originally from Nantucket, Mass. where he grew up fishing the dynamic waters around the island. He is a graduate of the University of North Carolina at Wilmington with a Bachelor of Science degree in Marine Biology. He also has a Master of Science degree in Fish and Wildlife Sciences from North Carolina State University. Waine currently resides with his wife in Morehead City, N.C.