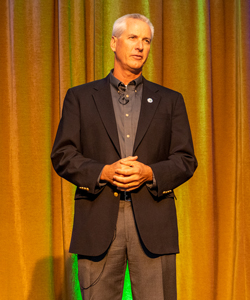 This year’s Summit theme centered around what 20/20 vision means for our industry. From opening remarks to our keynote speakers, ASA’s goal was to provide information and useful tactics to help our industry see what’s in front of us and how to respond in a strategic, focused manner.

During his opening remarks, ASA President Glenn Hughes said there are five challenges that currently impact the recreational fishing industry: weather is a constant variable; the imposition of tariffs on products imported from China; turbulence in government; trade and commerce issues and policy issues surrounding water, fisheries management and public access to public waters.

Hughes also noted that although fishing participation was up for the fifth year in a row – 49.1. million to 49.4 million – the rate of those dropping out – the churn rate – is largely equal to new or returning anglers. Retention continues to be an industry-wide issue.

Using the 20/20 vision as a driver, the board of directors unanimously voted to support a long-range planning initiative that will involve board members and staff.

“This new comprehensive, strategic planning initiative is an important step to build upon the association’s strengths and create a framework to guide us in the coming years,” said Hughes. “With a fresh vision, we can continue to be the best resource to our members and the entire recreational fishing community.” 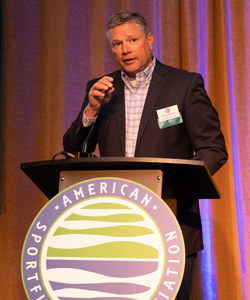 During the Summit, the new Retail Committee met for the first time. The committee’s Chairman is Patrick Gill, owner of TackleDirect, who also sits on ASA’s board of directors.

The Retail Committee is charged with understanding the challenges facing the independent retail sector with respect to the regional fisheries conservation and access issues that impact their business.

ASA board of directors Chairman Chris Megan, publisher, On The Water, LLC, noted in his remarks that small businesses, such as independent retailers, continue to be the lifeblood our industry.

The board charged the committee and ASA staff with developing a region-by-region strategic plan, focusing on communications, to let retailers know we are developing assets for them and that we want to know their business issues and concerns.

The 2020 Sportfishing Summit will be held October 12-15 at the Naples Beach Hotel & Golf Club in Naples, Fla.